Don’t go another day with missing teeth.
Restore your health and smile with a dental implant bridge. 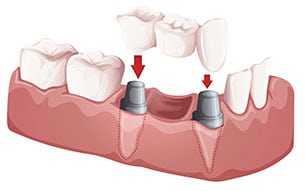 Don’t compromise any longer. It’s time to contact Harrell Implant Center to discuss an implant bridge – the permanent solution for your missing teeth.

Dr. Robert Harrell is the Charlotte-area leader in implant dentistry. His distinguished career is dedicated to creating beautiful smiles while restoring dental function. Over the years he has placed countless numbers of implants, each one customized to fit the unique needs of the recipient.

The Process: Why implant bridges are better than traditional bridges.

IMPLANT-SUPPORTED BRIDGES ARE THE ANSWER

Implant bridges are similar to single-tooth implants except multiple teeth can be replaced by only two posts. Unlike a traditional crown and bridge, which demands alteration of natural teeth to place a crown, implant bridges consist of two posts on either side of the missing tooth. Replacement teeth span the area and provide a more functional eating surface than typical bridges.

You’ll be able to clean the area between the gum and the bridge with a special type of floss or a small brush. Otherwise, you may treat the bridge like your natural teeth.

Your implant-supported bridge will feel more secure and comfortable than a removable partial denture, which rests on the gums. You will chew food comfortably, and the bridge will look like the natural teeth it is replacing.

WHEN IS IT THE RIGHT SOLUTION?

If the implants will be placed next to natural teeth, the natural teeth and surrounding gums must be in good health. If you don’t have enough bone to place and support the dental implants, the supporting bone can be built up using bone augmentation or grafting before the implant procedure begins.

HOW DOES IT WORK?

In some cases, Dr. Harrell may not want to put an implant in a certain place in your mouth. There may not be enough jawbone to support an implant, or the location may be too close to a nerve or sinus cavity (above your upper teeth). He determines this from the 3D-Cone Beam scan that is taken at your consultation appointment.

The time it takes to complete the implant process depends on many factors.

When the traditional method of placing an implant is used, the shortest time frame is about five months for the lower jaw and seven months for the upper jaw. This includes surgeries and the placement of the implant-supported bridge. However, the process can last a year or more, particularly if bone needs to be built up first.

Two surgeries are usually required to place and prepare the implant. During the first surgery, the implant is placed in the jaw and covered with gum tissue. Dr. Harrell may wait three to six months. At the end of the healing period, a second surgery is done to expose the implant so that the bridge can be placed.

To help determine where the implants should be placed, Dr. Harrell creates a model, called a wax-up, of what the bridge will look like when it is completed. To do this, he uses a model of your mouth made from impressions taken of your teeth and jaw.

Using the wax-up, he will make a surgical guide. The surgical guide is a clear piece of plastic similar to a mouth guard. It fits over your existing teeth and extends over the area where teeth are missing to show where the implants need to be placed.

During this time, bone and implants fuse to one another in a process called osseointegration.

Once the implants have fused with the bone, you can schedule the second surgery.

Dr. Harrell will determine if the implants are ready for the second surgery through X-rays.

This second surgery is simpler than the first. A small incision is made in your gums to expose the tops of the implants.

If a screw-retained bridge will be used, the first step is to remove the healing cap and screw a permanent abutment into the implant.

An impression will be made with the abutment in place. The abutment is shaped like a natural tooth that has been cut down to fit inside a crown.

During the next visit, Dr. Harrell will test the fit of the metal framework that supports the porcelain bridge. If the framework doesn’t fit correctly, it will be adjusted and you will return for another try-in. It might take several visits before the fit is right. Dr. Harrell will see to it.

Once the metal framework fits, the rest of the bridge will be completed, and it will be placed in your mouth and secured.

See The Transformations with our Before & After images

We take pride in giving life-changing smiles. From single implants to full-mouth makeovers, the patient transformations in our gallery are amazing.
SEE THE BEFORE & AFTER GALLERY

With 0% for 12 months financing or low interest-low monthly payment options, our team can help you find the resources to restore your oral health.

We offer the latest in dental implant technology. Schedule your FREE consultation to learn how scientific advancements in treatment can renew your smile and restore your confidence.